As drivers hit the highways for weekend excursions and road trips, many will lose their basic sense of life’s priorities and drive aggressively. Whether it’s the false sense of control and power that being behind the wheel gives them, or the feeling of anonymity for their actions, aggressive drivers overlook the immediate safety and well-being of themselves, their passengers, and the human life in the vehicles around them. For some, it’s only a matter of time before their emotions blind their shortsightedness and their behavior escalates to the domestic assault of “road rage.” According to the AAA Foundation for Traffic Safety, more than 1,500 people are injured or killed each year in the United States as a result of “aggressive driving.”

Aggressive driving is a behavior that affects every type of driver, including society’s most normal and upstanding men and women. Some psychologists have suggested that certain drivers are more susceptible to losing their tempers behind the wheel than others. In fact, road rage can sometimes fall under the medical explanation of “Intermittent Explosive Disorder,” which affects millions of Americans.

What to do if you’re an aggressive driver:

What to do if you’re the target of an aggressive driver: 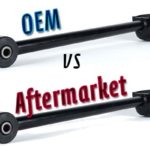 Does Your Auto Insurance Only Cover Aftermarket Parts Or Original Manufacturer Parts?

Sign up to receive latest news, updates, promotions, and special offers delivered directly to your inbox.
No, thanks